Get a Free Quote

Shed Solutions is in rural Centerburg, Ohio. With its family-owned shops and small town appeal, Centerburg is the perfect place to explore while checking out our sheds, garages, and cabins. The reason its called Centerburg is a pragmatic one – it’s smack in the middle of Ohio.

The people of Centerburg enjoy having all the benefits of small town life while being a stone’s throw away from Columbus and Cleveland. It’s a simple village home to about 2,000 people with quiet neighborhoods surrounded by open land and greenery.

One of the most iconic parts about Centerburg is The Centerburg Oldtime Farming Festival. This festival is an homage to Ohio’s agricultural roots. 2018 will be its 27th annual festival, during the third weekend of September as usual. Historical demonstrations, games, and contests, along with free admission and free entertainment, is bound to be a good time for a good deal.

When people living in, or traveling through, Centerburg want some adventure, they travel to neighboring cities Columbus and Dublin. Here’s some information about these two vivid Ohio cities.

Places to See Near Centerburg

The cities surrounding Centerburg each have their own distinct feel and style. These are two locations to check out on your way home from picking up your shed, cabin, or garage from Shed Solutions.

The capitol of Ohio, Columbus is home to almost 900,000 people. That’s more than any other city in Ohio; in fact, Columbus has the 14th highest population of any state in the US. Columbus is celebrated for its wage growth, and was voted in Money Magazine’s 6 Best Big Cities as the Best in the Midwest. Big business set down roots in the area, bringing jobs and opportunities to an already burgeoning city.

It’s not always serious for Columbusites; especially since the invention of the Doo Dah parade in 1983. This parade showcases all things satire, and prides itself on its lack of rules. The parade is a celebration of frivolity, and reminds people to take things less seriously for a while.

Columbus has a variety of attractions for visitors, and is well worth the trip. Not to mention its highly renowned college football team, the Buckeyes. Valued at $1.5 billion, Ohio State University has the highest valuation of any college football team in the US. So the next time you’re in Columbus, make sure you catch an NCAA Division college football game with one of the most promising teams in the league.

Dublin Ohio, or “the City with Irish Attitude”, takes pride in their Irish heritage. Every year, they host the Dublin Irish Festival as the largest three-day Irish festival in the world. Dublin’s Irish history traces back to 1810 with John Shields of Dublin, Ireland. He named the settlement after his birthplace based on its scenic, green landscape.

Over 41,000 people call Dublin home, and visitors from all over come to Dublin to frequent its many pristine golf courses. In fact, golfers stop to play the Memorial Tournament in Dublin as part of the PGA Tour every year.

Dublin Ohio is also home to a few sensationally unique monuments. “Leatherlips”, for example, is an eleven feet tall statue made in honor of Wyandot Chief Shateyahronya. Forged in remembrance to the historic chief, this piece is striking in contrast to the vast green fields surrounding it.

Harkening back to Ohio’s agricultural past, there is an interesting art installation of 8-feet-tall concrete corn statues along a main road. Also dubbed “Cornhenge”, these towering concrete veggies were made to commemorate corn and crop hybridization. It’s an intriguing sight, and a fantastic photo opportunity for travelers.

Peppered throughout these cities are a few incredible attractions that you can’t pass up.

Get the most out of your trip to Ohio with a few stops along the way. On your way through Centerburg, don’t miss out on these must-see attractions.

The Columbus Museum of Art is one of the most fun things to do in Columbus Ohio. It has been a local mainstay for residents of Ohio since 1878. Their 140th anniversary was celebrated with a theme of connecting with the community – and moments of “Wow and Wonder”. Their exhibits feature everything from current pop culture to classics from the 15th century. They also host weekly events and programs for visitors and residents alike.

Opened in 1927, the Columbus Zoo and Aquarium is a non-profit organization with an eye on conservation. With animal expert Jack Hannah at the helm as director from 1978-1992, it has a particular focus on healthy habitats and enclosures for its inhabitants. The Columbus Zoo and Aquarium houses over 7,000 animals and is separated into 7 main exhibits and 3 attractions – including roller coasters.

Founded in 1966, the Hillard Ohio Historical Society and Museum is focused on preserving early pioneer life. The village includes a chapel, one-room schoolhouse, granary, log cabin, and caboose which are all authentic period pieces. The village is painstakingly maintained to appear exactly as a typical pioneer village of the past.

If you live in Ohio, or are visiting Columbus or Dublin, check out Centerburg. It’s calm, pleasant, and has plenty of small-town charm. After seeing the Oldtime Farm Festival or the Hillard Historical Society and Museum, you may be hankering to take home some of that small-town charm. We can help you with that at Shed Solutions.

We are proud to offer many country outdoor storage products by Country Cabins. Our High Barns and Mini Barns are right out of rustic Americana, complete with double barn doors. With dozens of paint options and custom siding, you can nail the look you’re going for.

Start living a clutter-free life with Country Cabins. If you’d like more information on any of our products, give us a call at (419) 560-0403 for a free quote today! To make our outdoor storage products the most affordable on the market, we offer Rent-To-Own options as well.

Our portable storage options are designed with a focus on durability and function, but with stylistic flair. Using our custom options, homeowners have created truly unique sheds, garages, barns, and more.

More than ever, owning a product to take care of your storage needs is affordable - especially with our Rent-to-Own options. 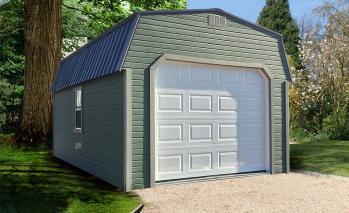 Protect Vehicles from the Elements

Garages by Country Cabins are custom built and heavy duty. With notched flooring that can handle large vehicles, these garages can store anything from vans to RVs with ease.
See Garages 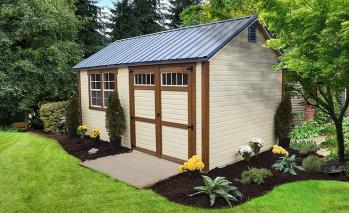 Store your yard equipment in style with our Garden Sheds. With custom options for doors, siding, trim, and more, make your shed stand out!
See Garden Shed 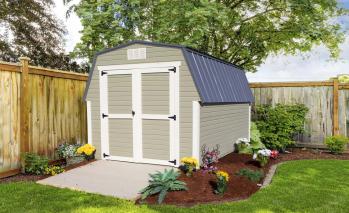 Petite Barns for Yards of Any Size

Barns are such a rustic part of any countryside - and now they don’t need to be reserved for just big, sprawling properties. Stow your outdoor equipment, or create your workshop or she-shed, with style in a Mini Barn.
See Mini Barns 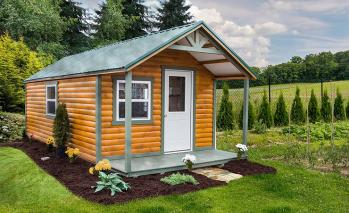 The Comforts of Home on the Trail

Our Hunting Cabins are spacious and built to last. Create the perfect getaway or hobby hub with our custom options for siding, lofts, and even workshops.
See Hunting Cabins 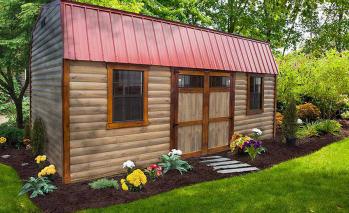 Get the traditional look of a barn while enjoying all the extra room! Our High Barns give you double the vertical space for all your storage needs.
See High Barns